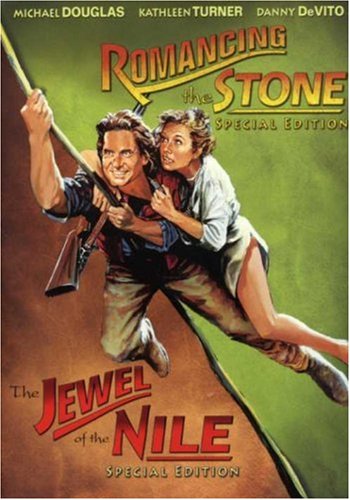 In the 1980s, some unexpected gems of movies seemed to come out of nowhere. And Romancing the Stone was one of them

With a nod perhaps to Raiders of the Lost Ark (1982), Romancing the Stone is a 1984 romantic comedy written by Diane Thomas.

Joan Wilder is a lonely (albeit successful) romance novelist in New York City. Upon completing her latest novel, she leaves her apartment to meet her editor, Gloria.

On the way there, she is handed a letter that contains a map. It was sent by her recently murdered brother-in-law, Eduardo.

That’s when things get worse. She receives a phone call from her sister (Eduardo’s widow, Elaine). Elaine has been kidnapped by antiquities smugglers, cousins Ira and Ralph. They order Joan to go to Cartagena with the map she received. This is Elaine’s ransom.

Without giving much more away, things get very adventurous and the movie is edge of the seat stuff.

It’s a bit dated now but I recommend this film.