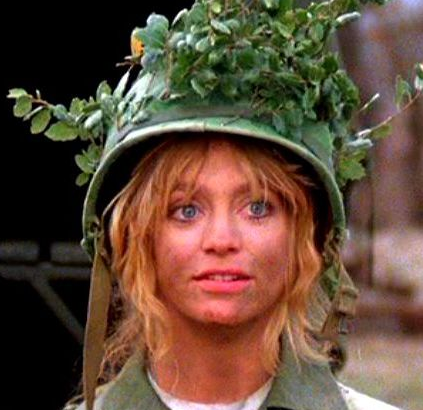 If you like Goldie Hawn then you may well enjoy her in the 1980 comedy called Private Benjamin.

It was a huge success at the box office and inspired a television series of the same name.

Here is a summary of the plot as described on Wikipedia:

Judy Benjamin (Goldie Hawn), a 28-year-old Jewish woman from a sheltered wealthy upbringing whose lifelong dream is to “marry a professional man,” joins the U.S. Army after Yale Goodman, her new husband (Albert Brooks), dies on their wedding night during sex. Adrift, Benjamin tells her story on a radio call-in show and meets an Army recruiter, SFC James Ballard (Harry Dean Stanton), who leads her to believe military life will provide the “family” she seeks. He also tells her that the service is glamorous, comparing it to a spa vacation. She has a rude awakening upon arriving at basic training. Judy wants to quit almost immediately, and is astonished to learn that she cannot, contrary to the assertions of her recruiting sergeant.

Army regulations and the continuing disapproval of both Captain Doreen Lewis (Eileen Brennan) and SFC L. C. Ross (Hal Williams), her drill sergeant, frustrate her, but when Judy’s parents (Sam Wanamaker and Barbara Barrie) arrive at Fort Biloxi to take her home, she decides to stay and finish basic training, which she does with distinction after a wargames exercise where her squad exposes an affair between a member of her training platoon and an officer from another company (with whom Lewis had also been having an affair), and take the leaders of both sides hostage. Upon completion of basic training, Judy meets Henri Tremont (Armand Assante), a French doctor, who is in Biloxi for a medical conference. They separate after a brief romance; Henri returns to Paris, and Judy enters training for the Thornbirds, an elite paratrooper unit.

She quickly finds that she was chosen for paratrooper training because the unit’s commander finds her attractive; after the other trainees have taken their parachute jump he attempts to sexually assault her on the plane. When she refuses to comply, he attempts to have her transferred as far away from Biloxi as soon as possible. Rather than accept what she sees as an undesirable post in Greenland or Guam, she negotiates an assignment to SHAPE in Belgium, and meets up with Henri again on a visit to Paris. He proposes marriage and she accepts, but when Captain Lewis discovers that Tremont is a communist, Judy is forced to choose either her Army career or love.

After she chooses Henri and gets engaged, Judy discovers Henri’s controlling side. He tries to “remake” her, and also insists she sign a prenuptial agreement (in French) to protect his family home held for centuries. Then, when she finds out Henri is still in love with his ex-girlfriend Clare and has cheated on her with their maid, she realizes that she is capable of doing whatever she wants and that she does not need Henri in her life. In the final scene, just as Judy is about to get married again, she walks out on Henri at the altar.

Watch this and I am sure that you will get some good laughs out of it.