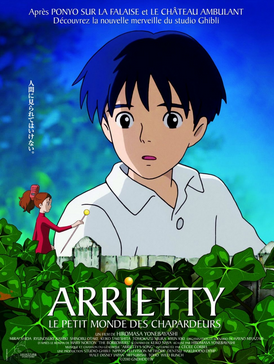 If you like Japanese film and Anime, you may well be intrigued by Arietty.

Arietty is a 2010 Japanese animated fantasy film directed by Hiromasa Yonebayashi as his feature film debut as a director. It’s basically a Japanese version of Mary Norton’s The Borrowers.

The studio that made the film,Ghibli, announced it in late 2009. Yonebayashi made his directorial debut with Arietty. Miyazaki supervised the production as a developing planner.

As mentioned, the screenplay by Hayao Miyazaki and Keiko Niwa is based on the 1952 novel The Borrowers by Mary Norton,

It tells the story of a young Borrower played by Shida who befriends a human boy (Kamiki) while trying to avoid detections by the other humans.

The film is a good watch and was an international box office hit. Watch it and you will probably like this movie.