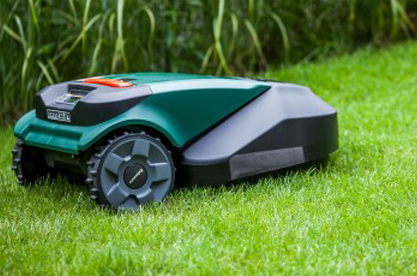 This is our independent Robomow RS612 review.  When we first heard about robot lawnmowers for the home, all manner of futuristic visions came to mind. What we were not expecting was such a small, compact machine that could take care of a lawn all by itself – if not after a little preparation.  The Robomow RS612 is the model of Robomow that we selected to review.  It is designed to cover up to 1200m² of lawn, which is about the middle of the range. It’s brothers (or is that sisters?) include the RS630 (3000m² coverage), RS622 (2200m²) RC306 (600m²) and RC304 (400m²) .  Yes, Robomow have been making these little fellows for some time and have built up a range to cover a variety of requirements.

The Robomow RS612 is a battery operated lawnmower, and it charges its own on-board battery via a docking/charging station that is the place where the lawnmower is parked between venturing out on its mowing missions.  Before we come to that, you need to understand how the Robomow RS612 is set up.  Just how does it know where to go and where to avoid?

Here’s how.  The initial setup involves creating a perimeter for the lawnmower, so that it knows its boundaries.  This is achieved by a (later to be electrified) wire that is hammered into the lawn using pegs (which are also supplied).  The instructions for this are relatively simple to follow and we found this straightforward.  The Robomow RS612, like other models, will start from its base and head of in an anti-clockwise direction.   You first need to decide where you would like to keep the base station, and it is recommended that this be at least 3 metres from a corner.  This is so that the lawnmower can line itself up properly in the docking station once it has come to the end of one of its mowing missions.

If you have areas where you do not wish for the Robomow RS612 to go into, you can create ‘islands’ which are loops of the wire. The trick is to keep one continuous wire (as the current needs to flow from the start to finish back at the base station).  Where an island is created, the robot lawnmower will avoid that area.  The Robomow RS612 manual explains how to do all of this in plain English (and additional languages are also available, of course.)

You can also create separate zones, or areas of the garden, for which the Robomow can be programmed to differentiate between.

Once the wire has been laid and connected to the base station at each end, it’s time to set up the Robomow RS612 itself.  This is mainly done by operating a fairly simple touch pad which sits at the top back of the lawnmower.  You can tell it which days of the week and between which times to mow the lawn, and from this is works out its own schedule within that.  For the mowing or cutting eight, you adjust this with a knob located underneath the hatch on the back of the mower. Once you become familiarised with all of these elements, there is not a lot more to need to know.  Watch this video which is really good to give you an idea of how to get started.

OK, so once all is set up the big question is what kind of a job does it do?  We can report that the Robomow RS612 runs around the edge of the garden perimeter to ensure that you have nice even edges, then takes care of the rest of the garden.  It does not do this in the traditional way that a human cuts the lawn.  Whereas people tend to walk behind the conventional lawnmower in ‘lines’, the Robomow does not.  It works using an algorithm which ensures that within 3 or four outings all of the lawn is covered.  This at first feels a bit weird and it’s hard to believe that it can actually achieve this without knowing what it has already covered.  But, somehow, it works.  You don’t get the lines on your lawn (which a lot of people like) but what you do have is lawn that is cut consistently yo the same height – every day.  It has to be said that the twin blades of the Robomow RS612 give a beautiful cut.

Safety will be a concern for households with small children or animals.  Although the Robomow RS612 will detect when it has bumped into a solid object and shut down its blades (e.g. a tree or a person), it’s razor-sharp blades are not something to be getting in the way of.  So, it would be a good idea to keep all life forms off the lawn when the lawnmower is in use, just in case – like with a regular lawnmower, really.  That said, a safety cut-out mechanism is designed to prevent this from ever becoming a problem.  During the course the Robomow RS612 review, whenever the mower made contact with a leg or tree it shuts the blades down, turned around and carried on elsewhere.  We didn’t have the heart to test it on a pet animal.

What also makes the Robomow stand out from competitors is the app.  With this, you can change settings etc and also take control of the Robomow RS612 and drive it around manually.  We tested this with an iPhone and the app (connecting to the mower via Bluetooth) worked perfectly well.

One of the frequently asked questions during the Robomow RS612 review was about the clippings. Just where do they get emptied and how often do you have to empty them.  Well, this is one of those great moments – there ARE NO CLIPPINGS.  The blades chop the grass so finely that it produces a mulch which gets distributed across the existing grass as it mows.  This must be one of the best features about this kind of mower, especially for those of us who have spent so many years scooping grass clippings out of the clipper catching thingy on the back of a traditional mower.

The RS612 is also surprisingly quiet, especially compared with traditional lawnmowers.  This means that it is perfectly acceptable to run it at any time of the night without disturbing anyone.  We also like the floating deck – a feature which allows this model (not all Robomow models do) to conform to bumpy parts of the lawn without making the cut uneven in parts.  Blades therefore stay at just the right height at all times during the mow.

The Robomow RS612 comes with some additional features which are worth highlighting:

After testing the RS612 extensively, it has kept the lawn at the same height consistently with no technical faults reported at all. This is a mower that does what it says on the tin, and means that you don’t have the hassle of mowing the lawn any more and have more time to..watch the robotic lawnmower do it.  It is something that your friends will no doubt be as fascinated by the as you will be once it is up and running.  The time spent setting up the lawnmower pales into insignificance when the longer term time savings are taken into consideration.

A recommended item for those who have better things to do than mow the lawn.  The Robomow RS612 is also particularly beneficial for hay fever sufferers who dread mowing the lawn.

Robomows can be purchased online at the following retailers: